“We gonna start this thing off right – we got Devious in the house tonight!” – From 1992’s hit single “Where They At”

New Orleans legend Devious (and of course, Hollygrove’s own) has long been a mainstay in urban music. His new single “Bounce That” was released just as Drake’s new singles are working to bring New Orleans’ unique and often imitated/never fully duplicated sound to the world! Super producer BlaqNMild created the track and added his awesome flavor to the already delicious recipe. Yes folks, it’s an exciting time in New Orleans, Louisiana.

Devious has long worked as an architect of New Orleans’ exciting sound, most notably for his historical work on DJ Jimi’s 1992 hit single “Where They At”. In fact, that song solidified the careers of not only Jimi, but Devious and Mellow Fellow and led to an explosion of Bounce Music as an entire sub-genre. Now that we’ve gotten that out of the way, we must put it out there that New Orleans culture created Bounce. The city’s own legends catapulted it into mainstream. Once it took its place in music history, artists such as Drake and T.I. helped to make the sound travel even further around the globe – BUT credit must be given to those who created, cultivated and nurtured Bounce and New Orleans music in the beginning! Devious is one of those “bricklayers”.

“Bounce That” is available at all digital outlets. A full length album entitled “The Narrative” will soon be released by Devious and you can expect to see some memorable collaborations on deck. Devious is a highly lauded, talented and awarded songwriter, artist, entreprenuer, educator, and mentor who has been busy gaining songwriting credits with Cardi B, Lil Duval, Project Pat, and more. As of late, BlaqNMild has been producing for Drake on “Nice For What” and “In My Feelings”, as well as on Devious’ upcoming album.

PNC’s new single is available on all digital platforms! DJs, get it from VirDIKO (VirDIKO.com).

New Orleans legends Mr. Meana and Kango Slimm of the beloved group Partners-N-Crime (PNC) are preparing to drop a new single entitled “Only Human”. It will be available for streaming and download on all digital platforms. The single was produced by KC.

For as much as we all miss BTY YoungN, we can’t imagine what his family must be going through as a result of his loss. We take comfort in the fact knowing he left behind a full catalogue of music and visuals, most especially his “BTY YoungN Mama” video, released on Mother’s Day. 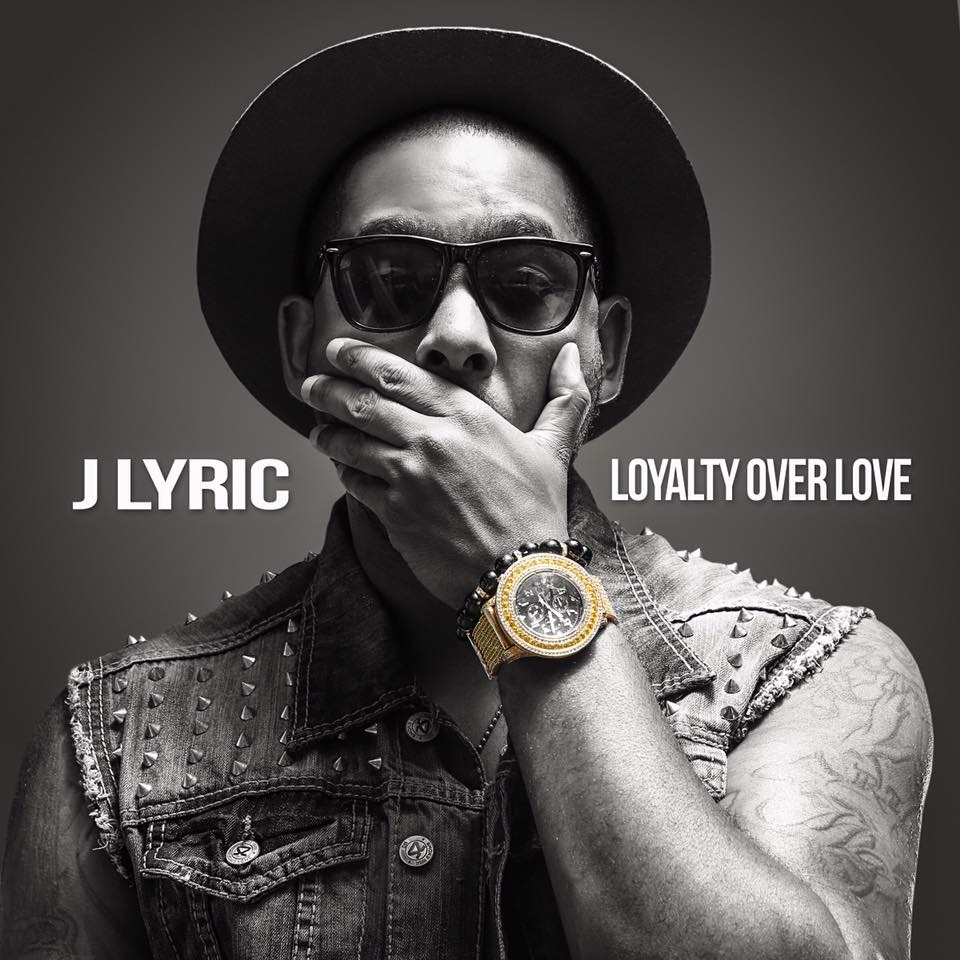 Veteran New Orleans artist J Lyric has put in a ton of work over the years, but no project has been more representative of his level of talent than the just released “Loyalty Over Love” album. As of midnight New Year’s Day, the project is available everywhere music is sold or streamed.

“Lunette”, the first single off the album is also the first video to drop. It’s available on You Tube. Watch/Comment/Share and download/stream the album!

Somewhere deep in the heart of Jefferson Davis County, Mississippi – Prentiss to be exact – there lies an unmined diamond who goes by the name of Reapa Ranks. And this gem is a breath of fresh air who vows to never forget where he came from – something many entertainers can’t claim in this day and age.

This young, up and coming rapper is putting in untold hours and a whole lot of energy into his entertainment career. His life has been a busy one recently – and it’s about to get a whole lot busier, given his plans for distributing his music around the globe. He has several new projects on deck, so it’s going to be a cold winter, to say the least!

Whether it’s the influence from his hard working father or just the hustle that being from The Sipp brings with it, Reapa Ranks is ready to climb that ladder to super stardom and he is more than capable of putting his Corporate Raiders Ent label on the map.

From “I Made It” to “Ring the Alarm” and “Ride or Die”, Reapa Ranks understands the importance of being tenacious and having a solid team to push a polished product out to the world.
We caught up with Reapa Ranks recently and here’s what he had to say:

Tell us a little about yourself.

REAPA RANKS: My name is Reapa Ranks. I’m from Prentiss Mississippi a/k/a “Lil Pakistan”. I’m 23 years old and currently travel back and forth from my hometown of Prentiss, Mississippi to the streets of Miami, Florida – putting in work, shooting videos and networking trying to get my music in different parts of the world.

Did growing up in Mississippi have any effect on your grind and hustle? How did it help to form your art?

REAPA RANKS: Well, I wouldn’t say it had an effect on my grind because round here it’s like we’re born with the hustle and grind for something. It’s up to you to find out what you have a passion and drive for and give dat sh*t 100% everyday. Mine just happened to be music. Being from Prentiss, Mississippi and Jefferson County period, helped form my art because it’s like …. The towns are tiny as hell, but I love em. Everything else is country parts. We call it backroads. Basically, I feel like being from The Sipp, we have to dig deeper than a lot of other guys in da game because they’re doing what they see the next man doing, saying, wearing, etc. Somebody to look up to, look like, sound like – all that, while in The Sipp the next man is not rapping around here. They’re probably trapping. There aren’t really many artists to look up to around here. You just have to dig deep into yourself, take in the happenings of your environment and say something to let the people know you feel em and know what they’re going through, but at the same time, letting them know you respect their struggle and hustle – and that I see what’s going on and will never forget where I came from.

To date, what has been your favorite project you’ve worked on?

REAPA RANKS: All my projects are my favorites, even the ones from “Dat Crew” days when I was in a group with my partners. I mean, it’s me and I love me some me, but I am my biggest critic. I’d have to say that my favorite project is my debut solo mixtape, “Nu No Limit”, simply because I had to come up with everything on my own. It’s entirely me and to be honest, I didn’t think I could do it. But my team/family kept me on my toes and I have gotten great responses from that mixtape and made many new fans. Shoutout to da OOG4ng and everybody rocking with Reapa Ranks. Y’all are the sh*t, on my Mama!

If there were 3 producers and 3 major artists you could work with, who would those be and why?

REAPA RANKS: Aww man, if I could work with 3 major artists and 3 major producers of my choice, I’d have to say #1 would be Young Dolph because he’s making major moves in da industry without a deal. Not saying that I wouldn’t sign with anyone (laughs), but to most music artists these days, making it to the big screen independently is the American Dream and my n**** Dolph living it. #2 would be Future simply because every time you hear Future on a track, he’s being 1000% Future Hendrix. He’s 1 of 1 and in 2017, that is rare. Last but not least #3, Offset! Offset just takes sh*t to another level. From the time he comes on a verse or hook, the club is going crazy. My 3 producers would be Metro Boomin, Sonny Digital and TroddiBeatzBoomin. I say Metro Boomin and Sonny Digital because they’re 2 producers that have been leading the industry for some time. I say TroddiBeatzBooming because my guy been making beats for me since the beginning when we were piled in a room with no A/C, grinding doing what it takes to make it.

What future endeavors are you currently working on?

REAPA RANKS: I’m currently working on new music, of course. I actually have a few visual ideas in mind that I can’t wait to shoot, along with shows and showcases. So I guess I can say everything is on the up and up. Slowly but surely, it’s time for The Sipp to get some recognition!

The entertainment world is such a wide open field right now, especially for music artists. Are there other avenues you’re currently exploring? If so, what are those? (acting, etc.?)

REAPA RANKS: I’d have to say music because everybody’s doing music these days, mostly rap. It’s like you don’t even have to make sense anymore. If it sounds good, you’re on. I’m out here still trying to have substance in my music. I’m not trying to be one of the guys never heard of again after a 6-month buzz to the world. And no, not really. Honestly, if I were looking to get into any other type of industry, it would have nothing to do with entertainment, know what I’m saying?

Where will we see your career in 5 years?

REAPA RANKS: In 5 years, I look to be in different cities everywhere rocking a stage, selling shirts, CDs, whatever. I’m trying to be all over the place, everywhere you turn you’re seeing and hearing Reapa Ranks from Lil Pakistan – making people get tired of me in the greatest way.

Keep up with Reapa Ranks on social media:

Artwork for what’s about to be the hottest song of the Summer (“Kitchen Dance”) has been leaked. The late great BTY YoungN and the hot young lyricist Hollygrove Keem put together this masterpiece shortly before YoungN’s untimely death. The track is produced by super producer KC.

Visuals were shot and edited by 2K Films and have a pending release date. The video features not only BTY YoungN and Hollygrove Keem, but also Mario P (@_mariodacomic_) and some of the cutest little kids you’ll ever see!

Stay Tuned. These two amazing artists are about to turn Summer 2017 white hot! 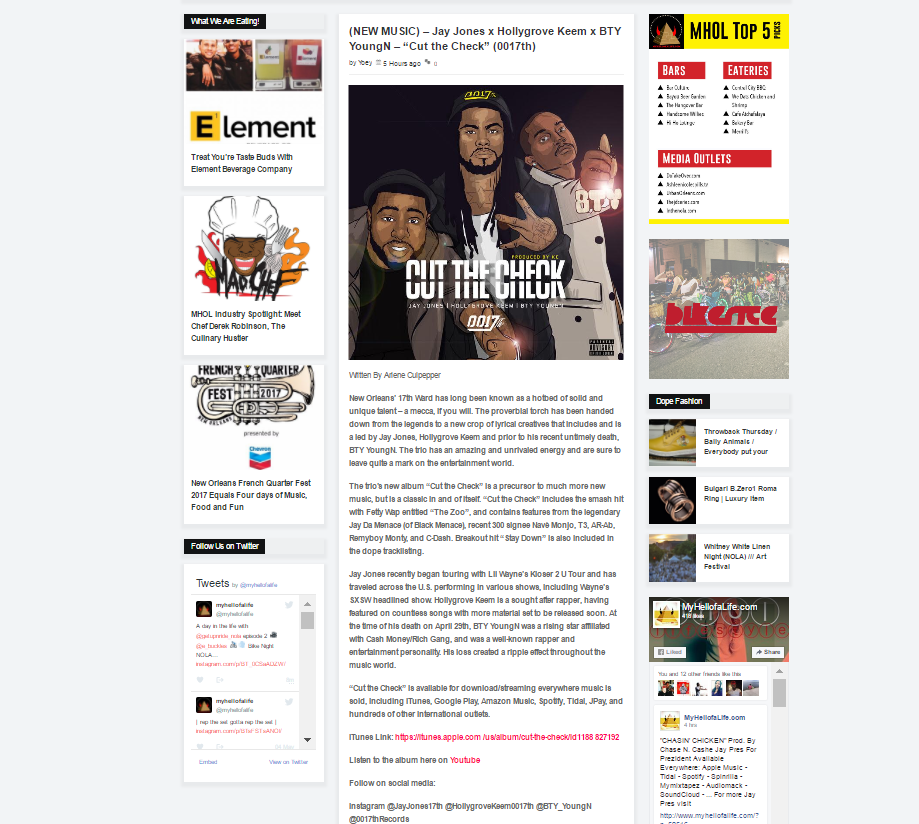 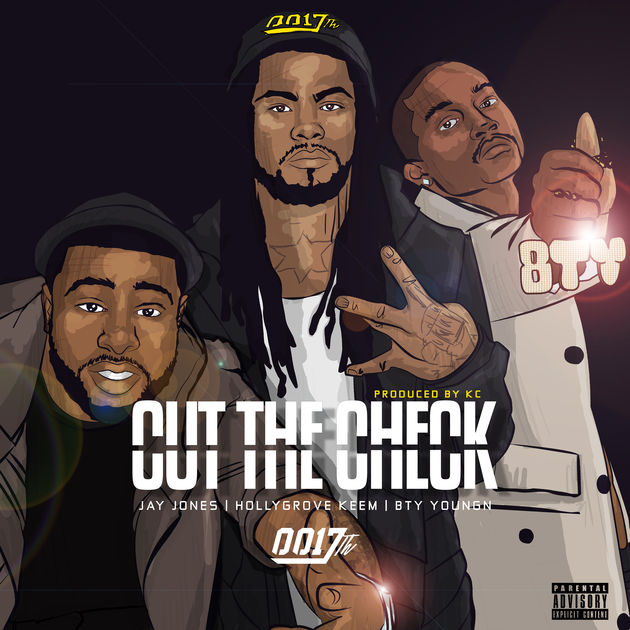 New Orleans’ 17th Ward has long been known as a hotbed of solid and unique talent – a mecca, if you will. The proverbial torch has been handed down from the legends to a new crop of lyrical creatives that includes and is a led by Jay Jones, Hollygrove Keem and prior to his recent untimely death, BTY YoungN. The trio has an amazing and unrivaled energy and are sure to leave quite a mark on the entertainment world.

The trio’s new album “Cut the Check” is a precursor to much more new music, but is a classic in and of itself. “Cut the Check” includes the smash hit with Fetty Wap entitled “The Zoo”, and contains features from the legendary Jay Da Menace (of Black Menace), recent 300 signee Navè Monjo, T3, AR-Ab, Remyboy Monty, and C-Dash. Breakout hit “Stay Down” is also included in the dope tracklisting.

Jay Jones recently began touring with Lil Wayne’s Kloser 2 U Tour and has traveled across the U.S. performing in various shows, including Wayne’s SXSW headlined show. Hollygrove Keem is a sought after rapper, having featured on countless songs with more material set to be released soon. At the time of his death on April 29th, BTY YoungN was a rising star affiliated with Cash Money/Rich Gang, and was a well-known rapper and entertainment personality. His loss created a ripple effect throughout the music world.

“Cut the Check” is available for download/streaming everywhere music is sold, including iTunes, Google Play, Amazon Music, Spotify, Tidal, JPay, and hundreds of other international outlets.